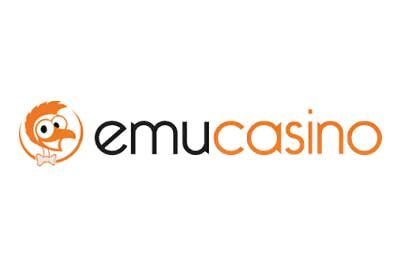 Long regarded as one of the best online casinos on the Australian & New Zealand market, EmuCasino has been making waves amongst its Canadian players over the past few years, for good reason.

The casino operates around the globe, with a significant amount of their players coming in from Europe, Canada, and New Zealand. However, due to recent regulatory changes, the site is no longer accessible to their Australian players.

Established in 2012, EmuCasino is a fully licensed casino in Curacao and is owned by Seasons Ever Ltd. With its recent foray into the European & Canadian market, it is well known for its large library of online slot games from multiple industry providers.

Following a revamp in 2015, the casino is now fully optimized for both desktop and mobile gaming to cater to an increasingly growing market segment that plays their games through their mobile and tablets.

If slots are what you’re into, you’re in luck. The casino specializes in slot games with over 1,400 games of all types and stripes for that should satiate the appetites of even the most discerning player, with dozens more added every month! EmuCasino has games by some of the industry’s largest gaming providers, with names like Microgaming, Betsoft, Evolution Gaming, Playson, Pragmatic Play, Asia Gaming, LuckyStreak, and Play’n GO, to name a few.

Some of the most popular games on the casino site are the ever popular Wolf Gold, Playboy Fortunes, Sakura Fortune, Money Farm 2 and Farm Ville 2, which have delighted and proved to be very popular for players around the globe.

In addition, the casino has also developed and launched their own slot game, Eddy Dundee, loosely based on the famous 1986 Australian-American film Crocodile Dundee that features their titular orange and blue emu mascot. The 5-reel, 25-line medium volatility online slot game has proven to be popular with fans due to its engaging gameplay and colorful graphics.

Apart from slot games, EmuCasino also has a wide variety of table games, video poker and live table dealers on the site for players who prefer other forms of games or experience the thrill of playing with other live players from across the globe at any time of the day.

The casino’s Live Casino games range from Monopoly, Blackjack, Baccarat, Roulette, to Poker and even Texas Hold’em, giving players ever more choices in their gameplay. Even amongst their Live Games, the casino also offers a fantastic variety of choices, ensuring that their players are never left wanting.

Accordingly, one of the major reasons for the online casino’s 2015 revamp has been to cater to their mobile players who would prefer to play on their mobile and portable devices instead of their laptop or desktop at home. EmuCasino has also ensured that their mobile playing players have exclusive content fully optimized on their mobile, with the most played, best games and other featured games located firmly at the top for ease & convenience.

There is a whopping 70% of players using their phones or tablets to play the games, with more showing signs of using their smartphones and tablets more often than their desktops!

This is due to the site’s quick and smooth loading times that is compatible with most operating systems and devices, ensuring easier gameplay.

For any player that prefers a seamless and easy gameplay on the go, inbetween their daily tasks, their mobile optimization has proven to be one of their biggest strengths.

New players who sign on to EmuCasino would have plenty to smile, with some of the best promotional offers available. All new players that have signed on will automatically receive 12 free spins and a player match bonus of up to $300, though the amount that they need to deposit in varies by country.

Canadian players also enjoy additional bonuses as the deposit amount needed to unlock the bonus is lowered for them, giving them extra incentive to sign on and play. The bonus is spread out over 3 different deposits, allowing players to take better advantage of the Match Bonus offered instead of underutilizing it.

For Canadian players, the Welcome Bonus terms are as follows:

Do note that there is a max bet size of $15 and a 45X turnover requirement that is valid on all games except jackpots, live casino games and virtual sports for all players to claim their bonuses, which is a much smaller requirement than most other online casinos. Players would have to utilize their bonuses within 3 days of their activation before expiration.

In addition, the casino also offers weekly Friday bonuses and promotions for all active players, with bonuses like Free Spins on selected slot games, exclusive deals, and their EmuPoints that would allow players to claim a wide variety of prizes, merchandise and Free Spins from the EmuShop.

Do note that there is a minimum deposit of $10 for all their banking transactions, with some methods giving a maximum deposit cap of $10,000, per transaction.

⚡️ EmuCasino Is Waiting for You!

So now that all’s said and done, why should you choose EmuCasino? Apart from the gargantuan amount of game choices, fantastic range of bonuses and a gameplay perfectly optimized for your mobile, the casino has one of the best customer service and support in the industry.

The casino has a group of topnotch customer support members to guide players through any issues that they might encounter during gameplay, or when they are depositing or cashing out their winnings. The very customer-oriented team has shown with quick turnaround time for all complaints makes it easier for any complaints that come in to be resolved in the shortest amount of time possible.

Also, we’ve found their revamp of Eddy, their mascot taking centerstage and a more personalized account of his adventures rather endearing, so that’s a plus in our books.  So go forth and hit the slots with Eddy, you just might find yourself entertained, both ingame and out!